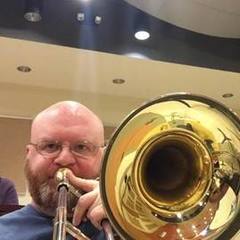 ​Having moved back to the Atlanta area a year ago from Las Vegas, NV, Bruce Mangan is a freelance bass trombonist and an active music education paraprofessional working with school brass programs in Gwinnett, Hall, Jackson, Cobb, and Cherokee counties.His primary teachers and mentors include educators Freddy Martin and Dr. Irv Wagner as well as Richard Brady of the Atlanta Opera and Atlanta Ballet; and Colin Williams of the New York Philharmonic.
Previously he has been on the brass and music staff at Harrison High School, Pioneer Drum and Bugle Corps, Spirit Drum and Bugle Corps, Alliance Drum and Bugle Corps, and is currently a brass instructor for Appalachian Sound Drum and Bugle Corps.
Having been a member of such organizations as the Georgia Symphony Orchestra (GSO), the GSO Jazz!, the Henderson Symphony (NV), Hollywood Pops Orchestra, and the New Sigmund Romberg Orchestra; Bruce has had the opportunity to share the stage with such performers as the Indigo Girls, Take 6, Byron Stripling, Bob Shepard, and Naomi Mauro.